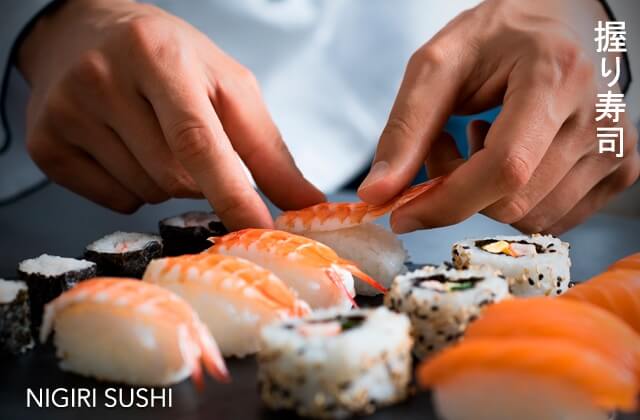 Sushi: The right way to eat it

Sushi is a staple Japanese dish, renowned around the world, but, do you really know how to eat it the right way?

Unlike what many would believe; sushi originated in the 2nd Century A.D in China; where it was used as a preservation method, consisting in cooking the rice and the fish to ferment them and later they would eat only the fish.

It was not until the 8th Century A.D. that this preservation method got to Japan. The difference was that the Japanese preferred to eat the rice with the fish, which brought them to eat both together when the fish was still a bit raw and the rice had not lost its flavour. They called this dish Seiseizushi.

As time passed, they invented Nigirizushi, this is a type of sushi that doesn’t need fermentation since they add vinegar to the rice and can be eaten with your bare hands. Thanks to this, sushi became a dish that is light and nutritious as well as quick to prepare, which allowed it to become popular all over the world.

Even though sushi was created in a simple way; there are some points that we need to consider to enjoy it the right way.

It could be that in order to adhere to stick to Japanese culture, it is considered important to use chopsticks to eat it correctly, but in reality, this is not necessary because from the beginning, sushi was meant as finger food.

To soak the sushi in soy sauce can be a common mistake, the right way is to only wet the area with the fish, to avoid affecting the rice and its flavour.
In Japan, to mix wasabi and soy sauce, or to use too much wasabi is frowned upon; this is because the strong taste of wasabi can cover the flavour of the rest of the ingredients.

Sushi is meant to be eaten in one bite per piece, if the piece is too big, it is important to leave half on the chopsticks but never at the table. Additionally, the order to eat all rolls is very important; you must eat first the lighter fish and finish with the ones with the oiliest consistence. Also, from the milder to the stronger taste.

The best ally to avoid mixing flavours, is ginger. Unlike what many people do, you are not supposed to put it on top of the sushi, but the right thing is to eat between each portion as a palate cleanser.

Now that you know the right way to eat this delicious dish, we invite you to try the Nigiri sampler at Tora Cancun, prepared by our chef with fresh ingredients of the best quality. Let us spoil you with the best culinary experience.

Did you know that fried tofu comes from the oldest monarchy in the world?